People Power in The Face of a Hostile Environment 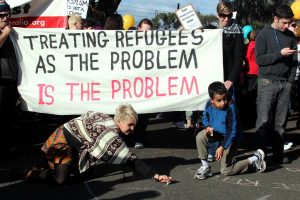 “Treating Refugees as the problem is the problem – Refugee Rights Protest at Broadmeadows, Melbourne” by John Englart (Takver) is licensed under CC BY-SA 2.0.

It’s almost unbelievable to think that this September will mark the 7th anniversary of the death of Aylan Kurdi, the Syrian toddler who captured the hearts of millions across the world, when his small body washed ashore after making the treacherous journey across the sea on a dinghy. The image of the 3-year-old jolted the world and for a moment, the tragedy provided a glimmer of hope that change would ensue.

Fast forward 7 years and not only have over 6,000 migrants drowned in the Mediterranean sea since Aylan’s death, but those who have managed to arrive at our shores are facing the harshest policies in an environment that is growing more hostile by the day.

In April this year, despite widespread condemnation, the government confirmed plans to outsource asylum seekers to detention centres in Rwanda. Following the introduction of the Nationality and Borders Act, the government announced it will transfer responsibility for providing asylum to those who arrive in the UK by irregular routes, such as crossing the English Channel in a boat from France, to a “safe third country” – Rwanda. The plan stated that anyone who had arrived in the UK ‘illegally’, as of January 2022, would be liable for removal. It slowly became apparent that once people are exported, their claims are no longer considered under UK law, but rather as Rwandan asylum claims – and even those who go on to be granted asylum won’t have right of return to the UK. The UK’s legal obligations end once they have been deported.

The plans mention asylum seekers arriving in the UK “illegally”, which begs the question; is there such a thing as an “illegal” asylum seeker? In short, the answer is no. The plan is referring to individuals who have arrived via unofficial routes, usually by crossing the channel on a small boat. Under international law, anyone fleeing home to seek safety has a right to apply for asylum, regardless of how they reach the UK. In fact, the majority of the guests we work with at Sufra, arrived through unofficial routes, risking their lives to find safety. For some guests from Syria, Iraq, Libya and Yemen, it took over a year to reach the UK.

Plans to export refugees to a ‘safe third country’ for processing has been lurking in the shadows for several years but it was mostly forgotten until this spring. However, the conclusion to label Rwanda as a suitable and safe third country is particularly puzzling, considering an estimated 10,000 Rwandan citizens have sought asylum in the UK between 2000 and 2018 fleeing dictatorship and human rights abuses. Many of these refugees are from the LGBTQ+ community and organisations that work with the community have expressed deep concerns about Rwanda’s anti-LGBTQ+ policies, which could put the lives of thousands of asylum seekers the UK is planning to export, at risk.

Seeing the Impact of the Policy first-hand at Sufra

As the news was announced and began to spread, I received back-to-back distressed calls from worried young people and families in temporary accommodation across London. Individuals who have already had to bear the brunt of the hostile environment policies were now facing a fresh anxiety. One single mother from Iraq who had arrived with her children in February and had still not had her asylum claim processed, called in tears asking whether she would be deported, and at the time, I could not confidently say no. Initially, the plan provided no clarity on who is set to be removed, just that it would include anyone who arrived ‘illegally’ as of January 2022.

Hope in Response to Hostility

As soon as plans were announced, immigration lawyers, activists and refugee organisations across the UK rose to challenge the decision and express solidarity with refugees. First, they challenged the retrospective nature of the rule and were successful in ensuring no asylum seekers who have arrived before June 2022 would not be deported. Within weeks, another challenge was launched against the plan over failure to identify risks to LGBTQ+ refugees. Charities across the country organised to write to MPs and place pressure on airlines not to carry passengers facing deportation. Dozens of activists protested outside of immigration removal centres, chanting ‘we are with you’, as the first notices for removal were issued to asylum seekers. Demonstrations outside the Home Office amplified the voices of scared refugees who are living in fear as they watch the news unfold every day. This led to global criticism of the plans and prompted the UNHCR to condemn the government on failing to meet the standards of legality and appropriateness.

As of 14th June 2022, 7 people detained in the UK were facing deportation. Despite the hard work of lawyers, activists, organisations and even criticism from Prince Charles who dubbed the Rwanda plan ‘appalling’, the Court of Appeal rejected the latest legal efforts to block the first deportation flight. Luckily, the European Court of Human Rights (ECHR) intervened – the Strasbourg court made a ruling on a single case, putting the whole plan on pause. However, Justice secretary Dominic Raab has confirmed the government will introduce a ‘British Bill of Rights’ which would give more power to the British Supreme Court over the ECHR and allow life-saving rulings to be ignored in the future.

We have seen the impact of people power reduce the number of asylum seekers facing deportation from 50 to 7, and we cannot stop now. Despite the advances we have made, there are still many suffering from severe trauma who wake up every morning to news that can upend their lives. We have seen first-hand the difficulties asylum seekers face in temporary accommodation, from unsuitable, cramped living space to starvation and lack of mental health support, and now the risk of being deported to another continent and an uncertain future.

The plan is unworkable, immoral, and unethical on many levels. We know that it will not deter desperate people seeking sanctuary from arriving in the UK. Instead, it will push a community that is already overlooked to the margins of society. Asylum seekers will seek any means of survival available and that could push many who fear deportation to escape from Home Office accommodation onto the streets. It will lead to an increase in mental health needs, which are already unmet. The number of young asylum seekers on hunger strike in the UK is rising daily and despite the Home Secretary labelling it as ‘attempts to frustrate the process and delay removal’, it poses a real risk to the lives of many young people.

As we celebrate Refugee Week and Pride Month, we must keep in mind that the hard-won rights we are celebrating were achieved through people power. Individuals came together demanding the changes we are celebrating today. We are now facing a moment in history that will shape the future of the UK’s response to refugees. We have a duty to ensure that we continue to resist any policies that pose a threat to the long-held principles of compassion and tolerance towards anyone who arrives seeking sanctuary.